Starting with version 3.10, SBuilderX is prepared to use a background image created from tiles downloaded from the Internet. This background image can then assist the scenery designer in creating roads, rivers, lakes, cities, etc, and in placing scenery objects. In this way, scenery items created by SBuilderX can be precisely positioned in the Flight Simulator world.

There are a number of sites, referred to here as “Tile Servers” from where tiles can be downloaded. However SBuilderX is only capable of working with a Tile Server if:

Most Tile Servers available in the Internet comply with rules 1 and 2 above. A notable exception are LandStat7 tiles that work with Nasa World Wind (the tiles in this case have a size of 512 x 512 pixels and use the Lat/Lon Geographic projection).

This document describes how a SBuilderX compatible Tile Server Plug-In can be implemented. The Plug-In consists of a DLL file that the user needs to place inside the “../SBuilder/Tiles” folder. Each time SBuilderX starts, it reads this folder to check if compatible Tile Server Plug-Ins exist. If so, they are loaded and used by SBuilderX. You can add many as many Plug-Ins as you wish.

ImageType – gets the file extension of the tiles (“.jpg” or “.png”);
ServerName – gets the name of the server;
MaximumZoom – gets the maximum Zoom of available tiles;
DownloadTile – downloads the tile specified by X Y and Zoom and saves it in the specified filename. The function returns True if it succeds.

SBuilderX uses a Lat/Lon Geographic projection. When SbuilderX displays tiles downloaded from Tile Servers it re-projects the images from Mercator to Lat/Lon (and makes an adjustment equivalent to a local azimuthal projection). In order to achieve that, SBuilderX keeps an internal representation of the earth identical to most Mercator Tile Server systems. 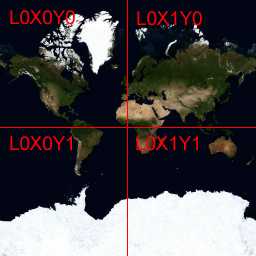 As you see there are 4 tiles that span longitudes from W180 to E180 and latitudes from approximately N85 to S85. At Zoom=1, the display would look like: 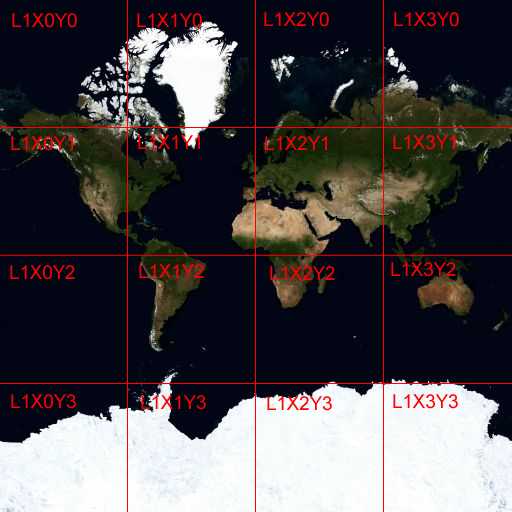 You can get the meaning of the X, Y and Zoom parameters from the names of the shown tiles. Tile name L1X3Y2 means Zoom=1, X=3 and Y=2. You can easily discover what is the position of a tile in the Globe, giving the Zoom Level (“L” in the tile name means Level) and the X and Y parameters.